Moderators also have access to a special Club Penguin forum for moderators only. At this forum, the events which will happen months from now are posted and revealed. I’m not sure if this forum is still in use but it was at one point. There are currently no pictures of the forum on the internet.

How do you find Moderators on Club Penguin?

Finding a moderator on Club Penguin is one of the hardest things to do! I’ve been playing Club Penguin for almost 4 years and I’ve seen all the moderators only once or twice each. Moderators are most seen on the English servers since Club Penguin is hosted in English speaking countries. Moderators visit random servers most of the time, but I have seen moderators on Frozen and Mammoth. I have seen Billybob twice on Frozen, once at the Cove and once at the Dock. They don’t stay long and it is very very difficult to catch them on. However, it is possible but I do not suggest trying to look for them. Just play Club Penguin and hopefully you will meet them.

Can I become a Moderator on Club Penguin?

Yes, but you must be at least 18 years or older and live in or near Kelowna, British Columbia or Canada. As a safety precaution, each moderator has to be at least 18 because they are dealing directly with children and have to pass a criminal record check. Moderators work together as a team in the Club Penguin office. This is a part of safety measures – they need to know who is moderating to keep Club Penguin safe. 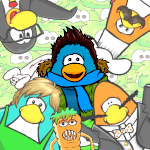 I think I remember seeing it somewhere else...

thats all she ever does is copy yhjrings from other sites and forums and puts it here!

nice job igna! theres a reaosn uve giot a chance for msf. as for arami, yes u do! ur first post was somehting fomr a tracker forum....u do that all the tie, u have like 5 reguler posts

Actually if I start to think of it... I don't think I do bad as a staff member!

it sorta is, the plagierism rule..

should i give an infraction

Oscar, you ARE a real good Staff Member! Being a Trainee doens't mean us are not good staff Members! Don't feel bad!

Btw, I think you shouldn't give the infraction.

Hey I just realised this is in the wrong section. I'll move it.

That would make 3 infractions the same day for teh SAME user!

you won this round but no next round

arami sure is breaking alot of rules.